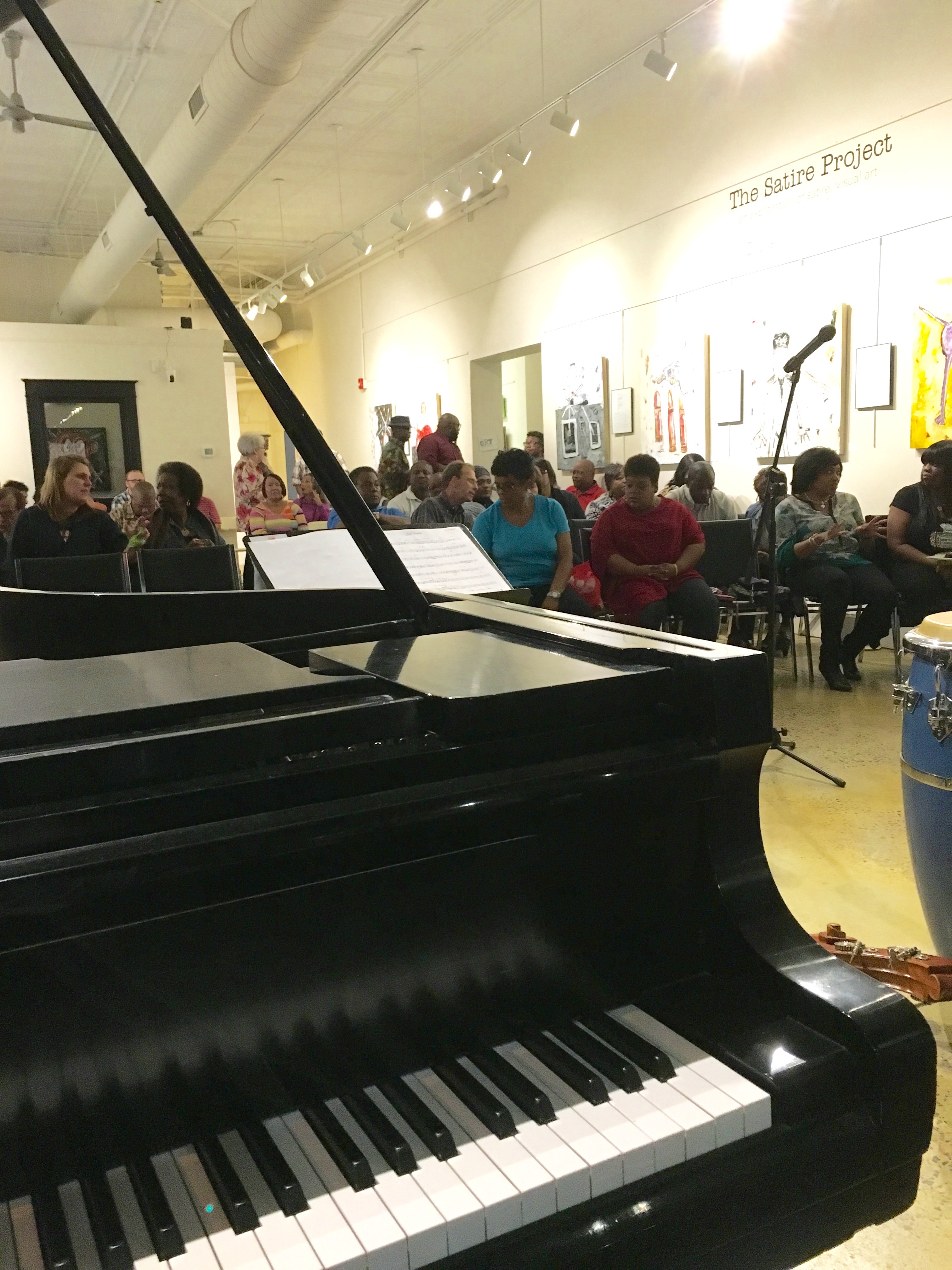 I lead a dual-life as an artist and technologist. This week, those worlds collided geographically. By day I am a sales engineer at Bronto, an email marketing company with gorgeous offices on the American Tobacco Campus in downtown Durham. At the end of the workday on Friday, I wandered over to an American Tobacco building that had been taken over by Moogfest, which has ostensibly taken over the entire city of Durham, and any press about it. I wandered through a few aisles of modular and subtractive synthesizers for sale, feeling bad that, although the festival is to celebrate the pioneering work of Robert Moog, I have really been lusting after purchasing a synthesizer from one of his contemporaries, Dave Smith. And yes, they did have a Sequential Prophet 6 on display. And yes, I played it, and maybe I drooled on it a bit.

I’ve been following the Moogfest happenings on social media (#moogfest2016), partially because my Beast bandmade Pierce Freelon is heavily involved in the festival’s Afrofuturism theme with his community organization Blackspace. In fact, as I type this, I think he’s leading another session of his workshop on an app that lets kids around the world create sci-fi beats. On Friday, I could not stay and explore the free portion of the festival any deeper, as I had to drive two hours to the east of Durham, where I would be playing an evening concert in Goldsboro, with PrimeraJazz. PrimeraJazz is a contemporary Latin Jazz quintet I started 10 years ago with percussionist Brevan Hampden, who now leads the group, and has just received his Masters of Music from Queens College. Thank God he will be returning to reside in North Carolina. So many of us Durham jazz folks have missed him dearly.

The Moogfest/Durham narrative has been evolving for weeks and months before the festival started – a story that combines Durham’s entrepreneurial rise to national prominence with its inner conflicts over gentrification. Like those linked news stories about Durham’s future, Moogfest’s themes point at the future: of art, of what it is to be human.

Sipping my coffee on this Saturday afternoon as day three of Moogfest pans out, I feel compelled to tell an alternate story of the future of art and of North Carolina. As I drove eastward on Highway 70 yesterday afternoon, the trappings of urban renewal gave way to vast, flat coastal plains, billboards featuring farm supplies and vape shops, boarded up auto garages, Smithfield BBQ. And then, an oasis.

Turning from the relentless highway into the local road towards downtown Goldsboro, rural gave way to urban once again, but on a smaller scale. Downtown Goldsboro is steeped in history – just like similar coastal downtown areas (Kinston, Wilson, Rocky Mount) there are old brick storefronts, a former movie theater, a few blocks worth of neatly orthogonal streets. But also signs of revitalization: a roundabout with a fountain in the middle, and, even more telling, a burger-sushi concept restaurant with bay windows and trendy-looking menus.

Mentally, I was prepared for just-another-gig – Brevan called me and asked if I wanted to play with PrimeraJazz in Goldsboro a few weeks prior. I really didn’t ask for any details – I trusted Brevan that this would be interesting, be fun, pay decently, etc. What unfolded from the time I first pulled up to the building to my last goodbye at the end of the night was 1) an extraordinarily fulfilling and humbling experience 2) the tip of an iceberg of a much bigger story than just-another-gig.

As it turns out, this was a performance as a part of the Arts Council of Wayne County‘s Jazz Showcase. Furthermore, it turns out that this series has existed for a year now, and has been curated by Eric Dawson, a saxophonist Brevan and I knew from North Carolina Central University, who had moved back to the coast. Over the past months, he had made the case to the Council board that there is little return in investing grant money in has-been/third-tier New York jazz acts, but instead focusing a series on existing, under-appreciated North Carolina talent. So, Eric had been using his own network of colleagues to close the loop on North Carolina’s artists and its potential audience. Hence, him calling his good friend Brevan. The Council’s Executive Director, Sarah Merrit, a vivacious woman, has been so grateful for the work Eric has done with the organization, and has loved the growth of this monthly jazz series.

Oh, one other very important detail: the jazz concert series is FREE for all attendees. I’ll come back to this later.

The band was set up along one glass wall of a lovely corner building. Performance gallery on one end, gallery/store for local craftsfolk on the other. Paintings on the wall, tin roof celing, folding chairs on the ground. Free lemonade and brownies near the entrance. You can sort of get a sense of it from my Instagram picture at the top of this post.

Sarah kicked off the show with an update to the audience: over the past year, the series sponsor, PNC Bank, had cut their funding in half, but Sarah was still grateful that this year’s grant was quickly approved.

The performance was wonderful. I always enjoy playing on a real grand piano instead of a keyboard (sorry, Moogfest). The band was on fire: Al Strong on trumpet, me on piano, Kenny Phelps-McKeown on bass, Orlandus Perry on drums, Brevan on percussion. Mostly what struck me, though, was the audience.

We were one. They listened, we turned up. Brevan got everyone to stand up and clap plena rhythms. They cheered. They supported. They smiled. We ate brownies together at intermission.

I’ll guesstimate a crowd of about 60 people. 60% black, 40% white. Most folks in their 40s through 60s. But at least 4 families with children. Some babies, some toddlers with iPads. One adorably precocious 8-ish-year-old girl who came up to me at intermission, perhaps urged by her dad, who told me she liked my piano playing and “HOW DO YOU DO IT!?!?!” to which I gave a good story about keeping up with your practicing. I went over to the parents later: turns out her dad is a conservatory-trained pianist, no longer working as a musician, in order to support the family. He’s the one giving his daughter lessons. I told the parents how grateful I was that they were exposing their children to the arts. In turn, they thanked me and the other band members for driving out from Durham to be here.

People came in and out over the course of the evening. The glass-storefront walking traffic proximity-to-burger-concept-restaurant location helped the series. The free ticket helped it the most. Brownies were a bonus. Those are explicit decisions on the part of the Council to make the arts accessible to the community.

The precocious girl waved goodbye to me through the glass, while I was in the middle of taking a solo, as the family walked to their car.

After the show, I got to know Sarah and Eric a bit more, as well as a woman who had been photographing each show since the series’ inception, and who used to be a high school arts teacher until she was ‘let go’ for a series of ‘infractions’ that ultimately tallied up to ‘actually letting kids express themselves and not be subject to arbitrary censorship and misunderstanding of culture on the part of the superintendent’ (my words, not hers).

It sounds like the Wanye County team is really proud of the history of their arts council – Sarah tries to be as progressive as she can – allowing contemporary jazz, nude paintings, a photography exhibit about the people of Afghanistan. The lattermost incurred lots of hateful phone calls to her complaining about endorsing ‘ragheads’ – her calm response to those people was ‘just come see the show for yourself.’ After seeing the exhibit, some percentage of those folks called back to apologize.

That, ladies and gentlemen, is the power of art. And an argument for why it is even more necessary in underserved areas than in steady-momentum areas like Durham.

By the 2015 census estimates, North Carolina’s population is around 10 million. If you take out the top three metropolitan statistical areas (Charlotte/Gastonia/Salisbury, Raleigh/Durham/Cary, Greensboro/Winston-Salem/High Point), that leaves about 3.7 million people living in places that look more like Goldsboro than like Durham.

The girl learning to play the piano, the man from New York who is caring for his mother in Kinston, but mostly, the systemically oppressed black population of coastal North Carolina (ok, all of North Carolina, ok all of America) – those are individuals and groups that the Arts Council of Wayne County serves. And Eric Dawson knows that it still takes individual sacrifice and innovation to continue to serve these groups. I got the sense that the parent Arts Council of North Carolina organization has a rolodex of familiar artists, even in the African/American category, and there maybe not yet a fluid system to find, attract, and retain young, rising, black artistic talent in the state, and find work for them across the smaller towns.

Sarah’s stake at the executive level is very important. But so is Eric’s. As a professional musician himself, he aligns with the working/tradesman stakeholders. He knows there are local artists hungry for work, and then they see their cities booking touring acts instead of its own people. He knows that his musician friends, besides having ideals like ‘reach out and connect with people’ more directly need to be able to make a living and find work. The artist fee minimums he has set in place are better than the competitive market for restaurant work. That’s important, even if it’s not yet sustainable for the grant-supported presenting organizations.

It’s an endless struggle. Eric fully intends to make this model work in Goldsboro and then bring it to nearby cities – he wants to create a reliable performing circuit for his peers. But it’s like he’s having to cut down the grass and clean the roads that once existed anyway. There was a thriving Atlantic coast circuit of regional funk groups in the 60s and 70s – see the research work of Jason Perlmutter at Carolina Soul, his discographies, his blog.

I’m also thinking of things like the Ocrafolk Festival and that one of my former work colleagues Chris Sawin is now the Executive Director of the Dare County Arts Council, waaayyyyyy out on the Outer Banks. Forget Moogfest and even forget the breed of intellectual jazz that I enjoy – how important is it that some beach music concert might very well change the lives of a few kids who are otherwise being influenced by the ubiquity of Netflix and the internet?

I’m humbled by the work of artists and arts institutions in rural areas. On a daily basis I wrestle with the future of everything, not just music, as served by global connectivity and virtualization, and the extent to which there might be a glass ceiling and we tend to abandon the timeless importance of the limitations of real, physical presence in the manifest world, of face-to-face relationships, and by extension, of the pure un-scalability of live art performed in front of a small crowd. What is my role to play in those two overlapping dimensions of reality? As an artist? As an entrepreneur?

In closing, thanks Brevan for the gig, thanks Sarah and Eric and the lovely people of Goldsboro for a great time. And you, if you made it to the end of this article.